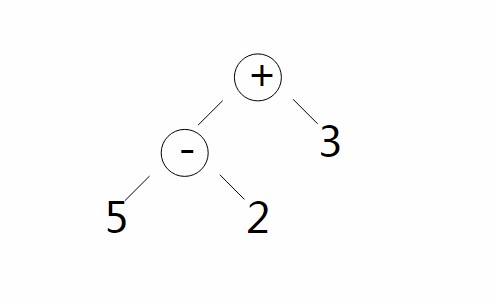 What would a program be without operators? A mishmash of classes, namespaces, conditionals, loops, and namespaces signifying nothing.

Operators are what do the work of a program. They are the very execution of an executable; the teleological driver of every process. Operators are a topic of great importance for developers and the focus of this week’s NSHipster article.

If we were to dissect an expression — say 1 + 2 — and decompose it into constituent parts, we would find one operator and two operands:

Expressions are expressed in a single, flat line of code, from which the compiler constructs an ast, or abstract syntax tree:

For compound expressions, like 1 + 2 * 3 or 5 - 2 + 3, the compiler uses rules for operator precedence and associativity to resolve the expression into a single value.

Operator precedence rules, similar to the ones you learned in primary school, determine the order in which different kinds of operators are evaluated. In this case, multiplication has a higher precedence than addition, so 2 * 3 evaluates first.

Arithmetic operators are left-associative, so 5 - 2 + 3 evaluates to 6.

The Swift Standard Library includes most of the operators that a programmer might expect coming from another language in the C family, as well as a few convenient additions like the nil-coalescing operator (??) and pattern match operator (~=), as well as operators for type checking (is), type casting (as, as?, as!) and forming open or closed ranges (..., ..<).

Swift uses infix notation for binary operators (as opposed to, say Reverse Polish Notation). The Infix operators are grouped below according to their associativity and precedence level, in descending order:

In addition to binary operators that take two operands, there are also unary operators, which take a single operand.

Prefix operators come before the expression they operate on. Swift defines a handful of these by default:

The increment/decrement (++ / --) operators were removed in Swift 3. This was one of the first changes to be made as part of the Swift Evolution process after the language was released as open source. In the proposal, Chris Lattner describes how these operators can be confusing, and argues for why they aren’t needed in the language.

Unary operators can also come after their operand, as is the case for the postfix variety. These are less common; the Swift Standard Library declares only the open-ended range postfix operator, ....

The ternary ?: operator is special. It takes three operands and functions like a single-line if-else statement: evaluate the logical condition on the left side of the ? and produces the expression on the left or right-hand side of the : depending on the result:

In Swift, TernaryPrecedence is defined lower than DefaultPrecedence and higher than AssignmentPrecedence. But, in general, it’s better to keep ternary operator usage simple (or avoid them altogether).

Once an operator is declared, it can be associated with a type method or top-level function. When an operator can resolve different functions depending on the types of operands, then we say that the operator is overloaded.

Developers have the ability to overload standard operators by declaring a new function for the operator symbol with the appropriate number and type of arguments.

For example, to overload the * operator to repeat a String a specified number of times, you’d declare the following top-level function:

This kind of language use is, however, controversial. (Any C++ developer would be all too eager to regale you with horror stories of the non-deterministic havoc this can wreak)

By default, the + operator concatenates the elements of both arrays, and is implemented using a generic function definition.

If you were to declare a specialized function that overloads the + for arrays of Double values to perform member-wise addition, it would override the previous concatenating behavior:

It makes sense that + would work on numbers — that’s maths. But if you really think about it, why should adding two strings together concatenate them? 1 + 2 isn’t 12 (except in Javascript). Is this really intuitive? …or is it just familiar.

Something to keep in mind when deciding whether to overload an existing operator.

By comparison, PHP uses . for string concatenation, whereas SQL uses ||; Objective-C doesn’t have an operator, per se, but will append consecutive string literals with whitespace.

One of the most exciting features of Swift (though also controversial) is the ability to define custom operators.

Consider the exponentiation operator, **, found in many programming languages, but missing from Swift. It raises the left-hand number to the power of the right-hand number. (The ^ symbol, commonly used for superscripts, is already used by the bitwise XOR operator).

Exponentiation has a higher operator precedence than multiplication, and since Swift doesn’t have a built-in precedence group that we can use, we first need to declare one ourselves:

Now we can declare the operator itself:

Finally, we implement a top-level function using our new operator:

We need to import the Darwin module to access the standard math function, pow(_:_:). (Alternatively, we could import Foundation instead to the same effect.)

When you create a custom operator, consider providing a mutating variant as well:

Use of Mathematical Symbols

This makes it possible to take the square root of a number with a single √ prefix operator:

Or consider the ± operator, which can be used either as an infix or prefix operator to return a tuple with the sum and difference:

For more examples of functions using mathematical notation in Swift, check out Euler.

Custom operators are hard to type, and therefore hard to use, so exercise restraint with exotic symbols. Code should be typed, not be copy-pasted.

When overriding or defining new operators in your own code, make sure to follow these guidelines: